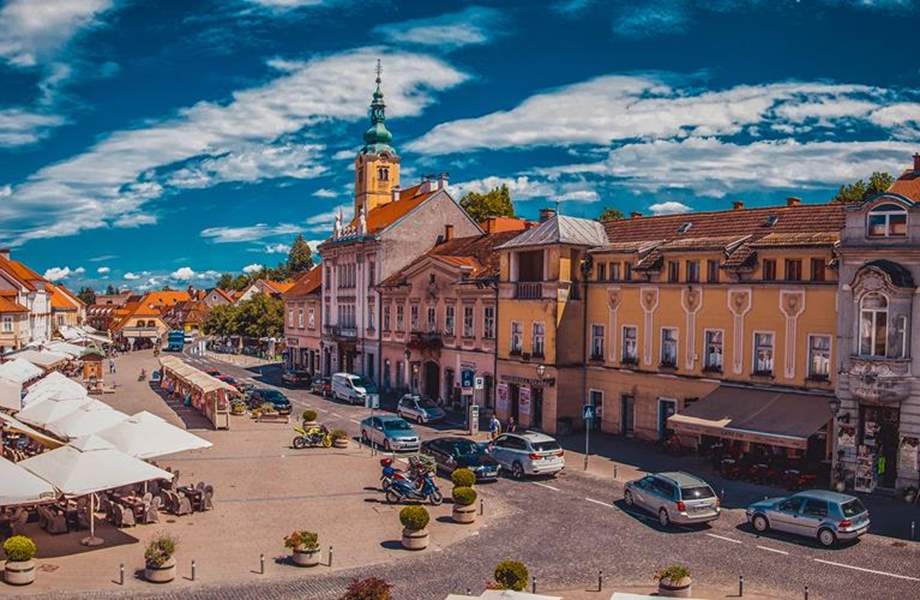 For centuries the main square has been the place where you can meet an acquaintance at any time of the day and it is the orientation spot for the locals and their guests. The locals used to call it merely the “square” or the “main square”, and then the “Leopold Salvator Square” in the honour of the Austrian archduke. Marking the one-thousandth anniversary of the Croatian kingdom, the square got its current name in 1925.

The area used to be a derelict space full of holes and weed, and after several more significant fires and floods at the end of the 18th century and the beginning of the 19th century, thanks to the mayor Ljudevit Šmidhen, it started to acquire present distinguishable shape.

All the buildings on the square were built in the late Baroque, Classicist or Bauhaus style and are listed heritage buildings. The building on number 1, a one-storey corner house built around 1800 is today a coffee house and a hotel “Livadić”, the first hotel “To the City of Trieste” used to be at number 3, while in the coffee house the first reading room in Samobor was opened. The city hall is on number 5, built according to the design of the famous Zagreb’s constructor Bartol Felbinger, and on its façade, on the level of the first floor there are reliefs showing the mayors Ferdo Livadić and Ljudevit Šmidhen. On number 13 there used to be the house of the Cantilly family, where Julijana lived, a famous Ljubica from the poem collection “Đulabije” by Stanko Vraz, while on number 14, in a house built in the Bauhaus style, there was a coffee house often visited by Antun Gustav Matoš while he was living in Samobor.

Its present look was created in 2002 by the architects Vanja Ilić, Ivana Ergić, Zorislav Petrić and Vesna Milutin, and it is perfect for enjoying and sitting on the terraces with a coffee, cream cakes and open views.

One more interesting thing – the Samobor Main Square is a rare main square not flown over by pigeons. Just a sparrow here and there.